Down memory lane: Music Hardware I almost had as a kid

It's Christmas time and all the gift buying'n'giving (and some other random conversations with like-minded people) reminded me of a bunch of hardware I almost got as a kid but... due to unfortunate (financial) circumstances, it was never meant to happen :P

Let me begin then, not with the "I wished I could access them" but the main "I almost got them" as a kid:

Because that was the most affordable (4 voice) polyphonic MIDI enabled synth (I thought) I could get my hands on!

Also, besides polyphonic, it was multitimbral! =D ...which, in my mind, would kinda solve the issue of only having 1 synth ;)

I clearly remember passing by a local shop and seeing a mixer-like panel and instantly stopping to investigate it further. It was a 6 Channel mixer with a built in simple BBD echo and a 4 track tape recorder plus a stereo/2 track tape player.

It was "perfect" for what I thought to be my (small) dream bedroom studio setup up! :D

It was a 16bit "real" computer with MIDI ports included! What else could a kid (interested in computer programming and trying to also buy a MIDI enabled Synth) wish for!? :D

...and you guessed it: that didn't happened also :]

I ended up being able to finally get something! An i486DX2 with a SoundBlaster 16 (which I felt had more future than a Gravis Ultrasound).
Got my hands on the smallest tracker I could download from my local BBS, the Composer 669 by Renaissance soon upgraded to Scream Tracker by Future Crew after trying FastTracker 2 and eventually settling with the MIDI capable Impulse Tracker by Jeffrey "Pulse" Lim.

When connecting an hardware instrument to Reason, where it can work both as a MIDI Controller (sending notes, controls, etc to Reason) and also as a MIDI Instrument (receiving notes, CCs, etc from Reason) it's always good practice to turn off its Local Control.
(unless you prefer to set the outgoing vs incoming to different MIDI Channels).

Local Control? What is that ?!
Well, usually, MIDI enabled instruments are able to disconnect their physical user-interface (keyboard/pads, knob/fader/buttons controls) from their sound "engine" or section(s).

Why is Local Control needed?
To avoid MIDI feedback loops or double triggering of notes, etc.

Imagine the following scenario in Reason (or any other DAW):

You have the External MIDI Instrument (EMI) rack device point to Arturia DrumBrute's (in) MIDI port, so you can send MIDI notes from Reason and trigger DrumBrute's pads (sounds).

But you also want to receive notes from the DrumBrute's pads/sequencer so you can easily record your pad playing into Reason's own Sequencer tracks. 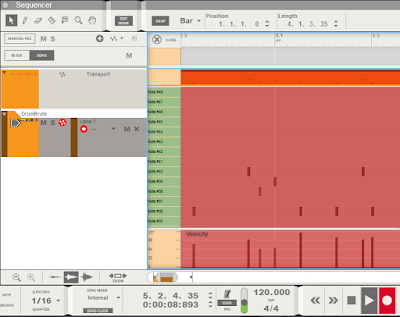 To do that, you simply add a (generic) MIDI Controller Surface and point it to DrumBrute's (out) MIDI port.

Done, right?
Well, not really, because as soon as you try to record your pad playing into the EMI device that's also sending MIDI to the DrumBrute, you'll hear all your pads being played at least twice. On a worse case scenario (not DrumBrute's case), if the MIDI instrument does MIDI THRU from its MIDI IN to its MIDI OUT, then you'll get an endless loop of notes playing, going back'n'forth from the DAW to the instrument and back to the DAW and to the instrument again, ad aeternum ;)

This is why is usually a good idea to set Local Control to OFF on external MIDI instruments connected in these configurations. The alternative to this, like I briefly mentioned in the beginning, would be to work on different MIDI channels but in this particular case, I find the use of Local Control, when available, to be a more practical solution.

This is why I did for the DrumBrute something similar to what I had already for the MiniBrute:
A specific Remote Codec that will turn its Local Control OFF while being used with Reason, allowing independent use of both its "controller" aspect and its sound generation aspect, without any local connection between the two, all controlled through Reason.

This Codec has 2 flavours built-in, showing up as "models":

"DrumBrute /<": it's a regular transparent one, just in case you prefer to use a dedicated Codec but don't want Local Control to be turned OFF. If you want this one, don't use auto-detection. You'll have to add it manually, by choosing "Add", "Arturia" and the "DrumBrute /<" model in the Edit, Preferences, Control Surfaces configuration of Reason.

I hope that you find this little simple Codec useful when enjoying your DrumBrute with Reason :)
Posted by Koshdukai 3 comments: